The Kevin-Prince Walk Off Gets Them Talking

An interesting Twitter exchange between @changefifa and @BrendanSchwab over the response of FIFPro, the international player’s union, to the Kevin-Prince Boateng incident. 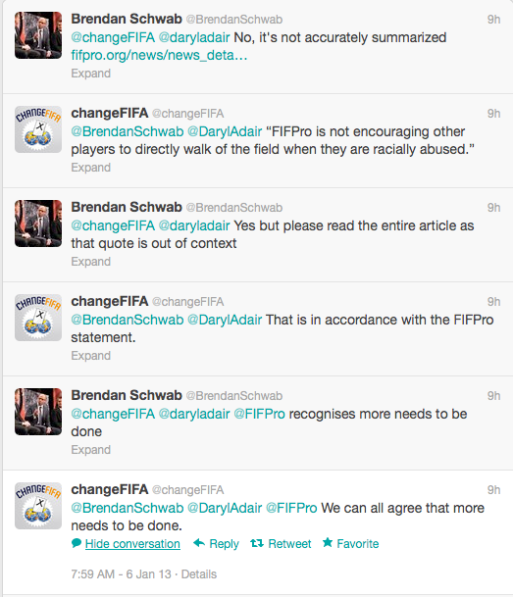 You can read the FIFPro statement here. The contested line is “FIFPro is not encouraging other players to directly walk of the field when they are racially abused”.

Another view on the issue, and how it translates ot the United States, is this from Stefan Szymanski, co-author of the book Soccernomics.

Szymanski, who has turned his book into a consulting agency, writes:

“If there were American sports hooligans they would be treated with extreme prejudice by stadium owners, since the owners would rightly think that it would damage their own reputation and certainly the scope for selling products to their peaceable customers during the game. If a few heads were accidentally broken in the process, I think owners would be confident that the jury would side with them in any court case.”

Boateng doesn’t know what he started. Or maybe he does. This discussion wouldn’t exist had the Milan players stayed on the pitch.