“You Suck, Asshole!”: An American Dilemma

News from America where there’s consternation about fans at Major League Soccer games chanting “You suck, Asshole!” at opposition goalkeepers as they take a goal kick.

But, apparently this is a serious issue. My alma mater (one of them), the British magazine When Saturday Comes, highlights that:

“The league has been attempting to ban this chant, which it describes as ‘offensive and lacking in creativity’ for many months now.”

This is true. Nelson Rodriguez is MLS Executive Vice-President of Competition, Technical and Game Operations. How’s that for a job title? Interviewed for a podcast by Howler magazine last year Rodriguez said: “We are puzzled by why anyone would want to participate and partake in that chant… Ultimately, the league does not support that chance or any chant in that vein.” 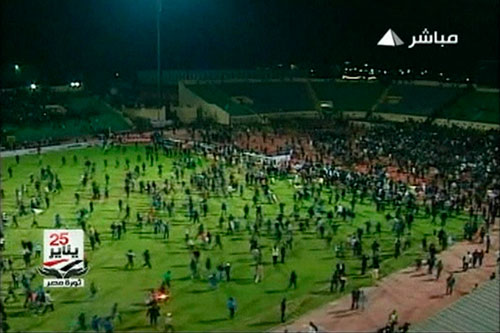 The next thing you know, it will be al-Masry v al-Ahly all over again.

You can listen to the excellent podcast here.

Rodriguez compared a football stadium with a cinema, also suggesting “Asshole” may be a gateway (no pun intended) chant to worse behaviour, bluntly adding: “It’s OK to fire a fan if they are more trouble than they are worth.”

A cinema in Seattle, yesterday.

Good luck with that, you might say. But the thing is, after some MLS teams asked fans to stop using the chant, supporters agreed. Apparently, those fans agreed “asshole” was too “profane”, while others thought it was “kind of dumb”.

New England Revolution was one such team and their (so-called) “Rebellion” fan group now apparently chant: “Your socks have holes!”

What a bunch of assholes.

← The Story Behind This Picture: South Africa & A World Cup Bid Flop
Heartbroken, The End Of The Affair →