If Qatar 2022 Goes Down In Flames, So Too Do Football’s Prominent & Powerful

For those who have been reporting and reading about the 2022 World Cup bids there was little new in France Football magazine’s report on Qatar’s controversial victory. But that doesn’t mean publishing a 16-page story that editors decided to headline “Le QatarGate” was a bad idea.

It was a great one.

Anything that keeps that sorry little tale (and I’m not just referring to Qatar’s victory) in circulation is worth the effort. So with a croissant of controversy, France Football conveniently reminded us that:

Trois: Qatar was all-in for “helping” the Argentina FA with any cash problems. As you do.

Et aussi: The big revelation for France Football was a tale unraveling on its own Paris doorstep. The story suggesting then-President Nicolas Sarkozy asked UEFA President Michell Platini to vote for Qatar for ambiguous “national interests” has done the rounds a few times. But the France Football version of it carries significant weight. 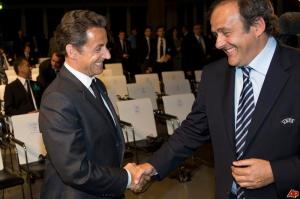 Sarkozy and Platini get cozy. And, all things considered, so would you. Wouldn’t you? Oh.

The magazine is the parent of the FIFA Ballon D’Or, the acknowledged top accolade given to the best male and female players in the sport. Yes, the lavish ceremony where football’s good and great vote for Leo Messi every year (and a woman not enough have, unfortunately, heard of). Oh to listen to those phone calls between Paris and Zurich on Tuesday.

With that authority comes responsibility. Especially when France Football is suggesting a form of collusion between a former President, a national sporting icon and current UEFA boss, and the Qatar bid.

Other versions of the story had links to Qatar purchasing French-made aircraft. Oh. Wait. What’s that? Qatari investments have actually since poured money into the Paris St-Germain football  club and launched a TV network that has paid good money for Ligue 1 TV rights? Um… OK.

Platini has denied any deals. Of course. On the other foot, France Football is sure of its solid story (partly because much of it has appeared elsewhere in some form). And so it goes. The 2022 World Cup will be held in Qatar but doubts will remain about the legitimacy of its campaign for as long as World Cup history will be written.

But there you have one thing for sure. If the Qatar bid does go down (or up) in flames then a lot of very prominent and powerful people in football will go down with it.

Not that that is necessarily a bad thing.

They will go down, won’t they?

← Pep, The Novelist, The Screenwriter, & The Director (& Penelope Cruz)
FIFA Works “Just Like A Little Mafia”. →