On July 8, 1982, France and Germany played one of the most epic World Cup semi-finals ever. The match, in Sevilla, is often remembered for German goalkeeper Harald Schumacher sending France’s Patrick Battiston into a coma.

They don’t play World Cup matches like that anymore. 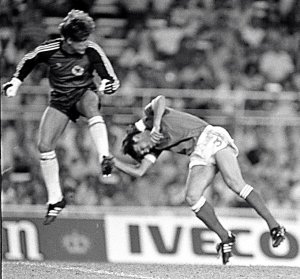 The game ended 3-3 after extra time and went to penalties, the first ever shoot-out in World Cup history.

This short film, Refait, is a reconstruction of the final 15 minutes of the encounter. It is filmed on the streets of the French town of Villeurbanne, near Lyon.

And it is brilliant.

← FBI Most Wanted: FIFA Corruption
A Lot Of Money Goes Missing… And No One Wants to Talk About It →