Buried way down deep in a press release from the Asian Football Confederation was a real life actual scoop. The maligned and almost non-existent Palestine Football Association wants to host the next Asian Cup and AFC Executive Committee meetings. 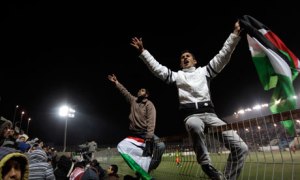 Good Morning Israel. You’re welcome. Although, if Israel can host a UEFA tournament – as it did this year – then why not Palestine?

In the AFC release, dated November 26, Palestine Football Association President General Jibril Al Rajoub apparently “requested to give the hosting rights of the AFC competitions and the AFC Executive Committee meeting to Palestine which will send a strong message to Israel.”

That “message”, for those who are new to this, is for Israel’s government to allow free movement of players, officials, footballs and even fluorescent orange training cones between Gaza and the West Bank. As documented right here that isn’t and hasn’t exactly been easy.

Still, in Palestine’s favour is that few countries are truly interested in hosting Asia’s supposed premier football tournament. Australia will host the next tournament, scheduled for 2015. One reason the tournament is heading Down Under is because no other country bid.

← Over 113 years of GLOBAL player transfers on a map and video
In a Syrian refugee camp, where football plays the role of the “mother” →