To be clear: very little will change when disgraced president Sepp Blatter is finally replaced in next year’s election.

As an example, please consider the campaign of candidate Sheikh Salman of Bahrain, the Asian Football Confederation President.

The AFC released a statement claiming its Executive Committee had unanimously backed Salman and passed a resolution “urging all member associations to unite behind and support the AFC president Sheikh Salman in his efforts to be elected as the first FIFA president from Asia.”

However, the AFC’s support of Salman comes after the Bahraini passed FIFA’s integrity check for the presidency concluding that – it is imagined – there was no basis to allegations the Sheikh played a leading role identifying athletes involved in pro-democracy demonstrations in 2011, some of whom were then allegedly imprisoned and tortured.

On other words, FIFA and AFC believe Salman’s version of events that suggests we should all move along. There is nothing to see here.

Still, Associated Press reported in 2011 that more than 150 Bahraini athletes, coaches, and referees were jailed after a special committee, which it said was chaired by Sheikh Salman who was then head of the Bahrain Football Association, identified them from photos of protests.

Among those arrested was Alaa Hubail and his brother Mohammed Hubail. Alaa Hubail was interrogated on national television and called a traitor. Both were allegedly tortured. At the time Alaa said: “What happened to me was a cost of fame. Participating in the athletes’ rally was not a crime.” 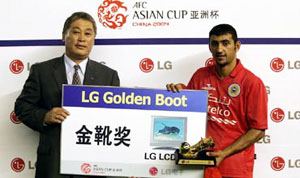 Alaa Hubail (r) was imprisoned but is now quoted as a supporter of Salman’s FIFA candidacy.

But then in in the past month, the website Inside World Football – which has previous form publishing stories supporting curious agendas- published an extensive interview with Sheikh Salman that took place in Bahrain.

Salman railed against the FBI arrests in Zurich, denied (again) allegations he was involved in the government crackdown on athletes, and criticized scrutiny from human rights organizations.

And then – surprise! – an accompanying interview with Alaa Hubail – the iconic Bahraini footballer arrested and allegedly tortured – backed Salman for the FIFA presidency.

“Shaikh [sic] Salman was not involved in the political decisions,” Hubail was quoted as saying. “They (media and human rights organisations) are using 2011 because he is part of the (Bahraini) Royal family. I want to be completely honest. I have not encountered anything to believe these allegations are true.”

Salman coudn’t have wished for better support if he had typed the words himself.

But we know the Sheikh would not have done that himself. He doesn’t have to. As Sporting Intelligence has reported in its comprehensive coverage of the FIFA presidency: “Sheikh Salman’s campaign is being spin-doctored – and effectively run – by Sepp Blatter’s dirty tricks man, Peter Hargitay.” 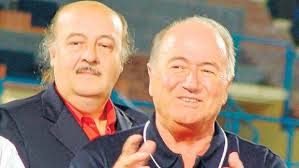 Behind the scenes: Peter Hargitay (l) attempts influence and being in the right frame at the right time.

The same Peter Hargitay who – along with work for Blatter – has advised disgraced AFC president Mohamed Bin Hammam, led Australia’s flop bid for the 2022 World Cup, produced films, and puffed Union Carbide in the aftermath of the Bhopal disaster that killed at least 3,700 people.

And that is how you place yourself to win an election.

Welcome to the new FIFA. Same as the old FIFA.