The Twitter feed of Sevilla midfielder Samir Nasri – on loan to the Spanish side from Manchester City – was full of activity on the Tuesday night between Christmas and New Year’s Eve.

It all began with a Tweet from a company called “Drip Doctors”, a Los Angeles clinic that claims to specialize in so-called intravenous vitamin therapy, hydration, and anti-aging and cosmetic enhancements.

So far, so good, according to the company’s Tweet announcing that Nasri had taken one of its treatments while in Los Angeles. 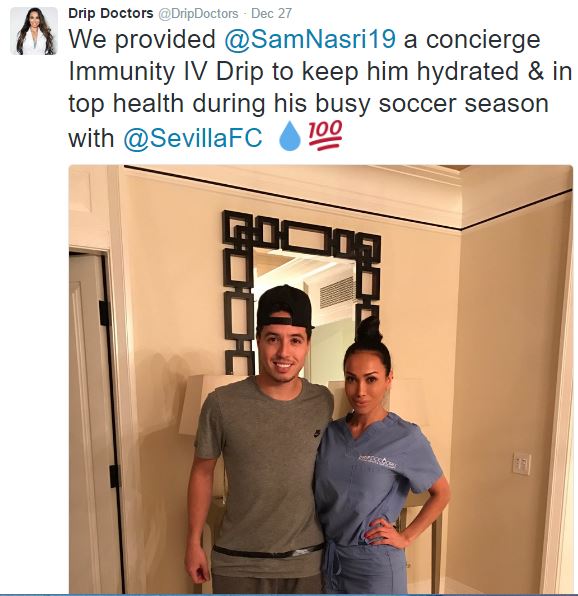 Then, things got weird.

Nasri’s account appeared to be taken over by a robot, a hacker, or an irate girlfriend who had thought the Drip Doctor had provided additional services to Nasri, including 3am sexcapades.

The woman in the picture with Nasri – and referenced in a now-deleted tweet – is Drip Doctor’s CEO and “physician assistant” Jamila Sozadah. Her Drip Doctor bio states she is:

the Co-founder of Drip Doctors and Board Certified Physician Assistant through the NCCPA. She currently practices in Emergency Medicine, Dermatology and specializes in IV Vitamin Therapy and Cosmetic Enhancements. Her passion combined with her vast knowledge of the human body and behavior, allows her to help people maintain excellent health, vitality and optimal function of the mind, body, and spirit.

Tee hee and all that. But while Nasri’s personal life is his business (until it gets splashed all over the internet), trouble is the initial tweet from Drip Doctors has sparked an investigation into a possible doping offence.

According to Spanish sports newspaper AS, Richard Ings, a former head of the Australian Anti-Doping Agency, saw the Drip Doctor tweet and notified his former colleagues at the Spanish agency

“Following the publication of this information, the agency launched an investigation to find out what the treatment is.”

“The presence of a sportsman in a clinic like this is suspicious as such.”

Intravenous treatments are only allowed if they are not over 50 mls and do not contain any prohibited substances.

A cautionary tale how one tweet – one you don’t even send from your own account – can prove to be very problematic.

← Russian Politicians Want To Ban FIFA 17 Because It Is Gay Propaganda, Apparently.
The Bizarre Story of the Fake Nonprofit That “Campaigned” For Workers in Qatar →