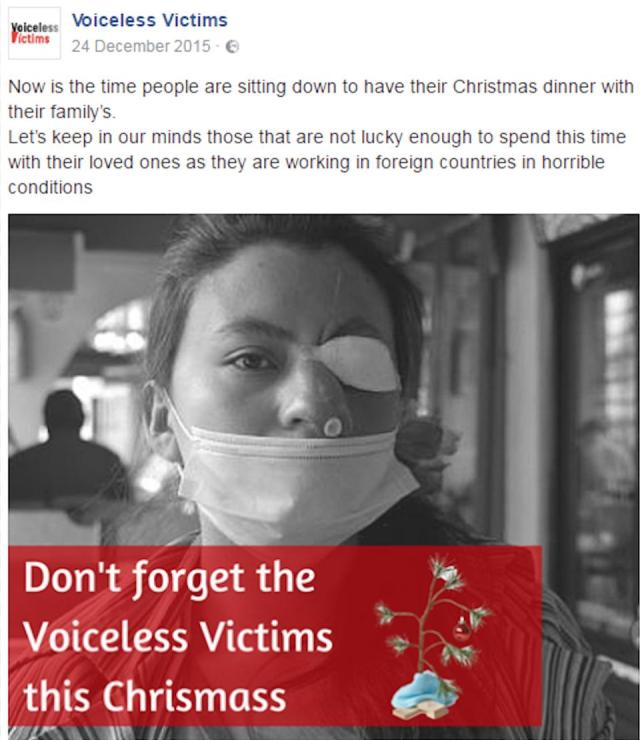 Voiceless Victims claimed to be an organization “committed to give a voice for those who had their own silenced.” Its goal was to make “a better world by providing aid to those who need it most.”

In August, 2016, the human rights group Amnesty International received an email from someone by the name of Amelie Lefebvre, who claimed to be a spokesperson for Voiceless Victims.

Except Amelie Lebfebvre didn’t exist and – after an extensive and bizarre investigation by Amnesty International – it can be revealed that Voiceless Victims is a bogus organization as well.

“Lefebvre”proposed to Amnesty International that the two organizations work together to highlight the alleged abuse of foreign workers in Qatar who are building stadiums and other facilites for the 2022 FIFA World Cup.

Lefebvre wrote: “[The Qatari government] for the sake of ostentatiousness tramples each day on the basic rights of hundreds of thousands foreign workers who build, amongst others, the stadiums for the World Cup.”

But what caught the attention of Amnesty International – or at least its IT people – was the PDF attached to the email that claimed to be a letter. The attachment was a phishing device, redirecting to a website which had been linked to cyber attacks in the past.

Clicking on the links would have caused our machines to visit a very suspicious browser profiling service. This would have provided them with a whole host of information about the web browser we were using, the software running on our machines and our IP address and approximate geographical location. There is no reason a legitimate organisation would need this information. Our tech team suspected it might have been the first step in understanding our machines and network so that further well-crafted phishing attacks could be delivered.

It turned out “Amelie” had previously attempted to engage Amnesty International in cooperating on a project targeting FC Barcelona for its sponsorship deal with Qatar Airways. It launched social media campaigns and also promoted a fake news story – purporting to have been published by Al Jazeera – claiming the Qatari government had launched a hotline for migrant workers to reclaim their confiscated passports.

Then things got sinister. Voiceless Victims invited workers in Qatar, their families, and any witnesses to report any instances of abuse to it.

We know this because Amnesty International launched an investigation into the organization and discovered, despite a poorly fabricated online presence, there is no such person as Amelie Lefebvre, nor “Luke Hann”, who it was claimed was the organization’s founder and CEO. There was also no trace of the organization at an address in Lille, France, where Voiceless Victims supposedly had an office (the building was photographed by AI investigators, below).

Read the full Amnesty International report on the scam here.

So who was behind the fake organization? It remains unknown. Amnesty International suggests it may have been a government agency or public relations firm. But which government? Qatar – itself – is one theory although the Qatari government claims it “has nothing whatsoever to do with Voiceless Victims”.

Another theory is Syria, or Egypt, or the United Arab Emirates which, Amnesty Interantional explains, has been “accused of planting anti-Qatar stories in the US media, of funding an opaque Norwegian NGO which sent researchers to investigate migrant labour in Qatar and of providing briefings to UK journalists on an alleged extremists in Qatar.”

A subsequent investigation by Forbes dug deeper into Voiceless Victims. “Luke Hann” was located but the “CEO” declined to speak to a reporter because he was “traveling”.

Those contacted by Voiceless Victims have been subjected to frequent online attacks since the horrors in Qatar became public knowledge. Jin Sook-Li, migration, gender and campaign director of the Building and Wood Workers International, a Geneva-based global union federation with 12 million members, told me her employer’s general secretary, Ambet Yuson, had his email hacked earlier this year and its website server was frequently down at the start of the year. “My Skype was hacked too and I still don’t have it back,” Sook-Li added.

A spokesperson for the ITUC, a Brussels-based trade union federation that boasts 168 million members, pointed me to a press release from January 2016, in which it claimed to have been the victim of a “disinformation campaign” related to its activism around 2022 World Cup worker conditions. The attack “included the dissemination of fake videos and other materials, setting up of fake social media accounts and various other techniques aimed at the ITUC and at individual people.” It noted that ITUC staff email had been hacked and “falsified material inserted into emails.”

Separately, when general secretary Sharan Burrow was co-chair of the World Economic Forum meeting in Davos in January this year, cyber spies were tracking “pretty much every engagement that she had at Davos,” the spokesperson added. The digital sleuths then used fake social media profiles and search engine optimisation to promote fake and negative stories about Burrow.

You can read the amazing full Forbes report here.

The postscript – but maybe not the end of the story – is that as Voiceless Victims was exposed as fake, its website’s content was deleted and replaced with the message”‘Voiceless Victims’ is under attack. The Bad guys won.”

And you thought the World Cup was about football?