The Saudi scandal has nothing to do with Islam or ‘culture’: it’s simply a snub

The World Cup qualifier between Australia and Saudi Arabia on Thursday attracted attention for more than the comical defending by both teams.

A planned minute’s silence by both teams (and attending fans) to pay tribute to the Australians killed in a terrorist attack in London was bungled when the Saudi team failed to line up – as is custom – with their opponents.

Cue justified outrage from around the world with some claiming it is not “Saudi culture” to stand for silent tributes to dead people.

First, let’s separate religion from culture and acknowledge there is nothing in the Qu’ran nor any subsequent hadith that says it is forbidden for professional footballers to stand on a football field to publicly mark a tragic event (mostly because the Qu’ran was written prior to organized football being invented and pretty much no imam has had to interpret anything like this ever, but we digress).

If this was an issue of “culture”, which can be interpreted as following Wahhabist Islam that governs Saudi Arabia, let’s say that we understand it is not a big deal if a particular sect thinks it is OK for a Muslim to kill a non-Muslim and therefore what happened in London last weekend was not worth a moment’s silence.

The problem is still not about religion or culture. It is the tone deafness, arrogance and incompetence of the Saudi delegation and the Asian Football Confederation running the match.

According to Football Federation Australia, this was the chain of events that led to a moment of silence heard around the world:

Here’s an image of players from the Saudi Arabian club Al Ahli appropriately joining players from Barcelona in a moment of silence before a game in Doha, Qatar, in December, 2016, to pay tribute to victims of the Chapecoense plane crash. 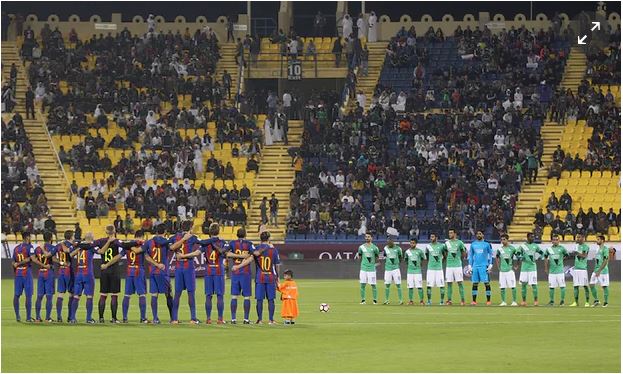 So much for “culture”.

It is astonishing to think the Saudi delegation did not think that declining to participate in a tribute would be incendiary at worst and terrible public relations at best. Then again, considering the track record of football executives and administrators, maybe not.

Australian TV, advised of the Saudi position, only showed the Australian team and crowd during the tribute. Interestingly, it’s not known if Saudi Arabia coach Bert van Marwijk gave his deleagtion advice on how to approach the request from the Australians. The Dutch coach and his assistants remained rooted to the bench during the moment of silence.

The Asian Football Confederation also holds significant responsibility for its inability to get the teams to agree on pre-match protocol. These tributes are not spontaneous and are informed and agreed by both teams and the confederation.

By Friday, the Saudi Arabia Football Federation realising the scale of the blunder its delegation in Adelaide had made issued an apology saying it “deeply regrets and unreservedly apologises for any offence caused” by the players’ actions.

“The players did not intend any disrespect to the memories of the victims or to cause upset to their families, friends or any individual affected by the atrocity.”

“The Saudi Arabian Football Federation condemns all acts of terrorism and extremism and extends its sincerest condolences to the families of all the victims and to the Government and people of the United Kingdom.”

It turned out it wasn’t just Saudi Arabia’s goalkeeper – or Australia’s defenders – who had a bad night.