If politicians – and their advisers – needed a reminder of the power of football as a tool for diplomacy they only need look at the match-winning performance by Croatia’s president Kolinda Grabar-Kitarovic during – and after – the final.

Croatia won many fans during the tournament with its epic performances – especially the team’s penalty shootout wins against Russia,  Denmark,  and England. Yet, Grabar-Kitarovic, drenched by pouring rain and wearing the Croatia national team shirt, might have won her country just as many fans.

As Russian president Vladimir Putin stood under the podium’s sole umbrella, the summer downpour became Grabar-Kitarovic’s asset rather than hindrance. Bedraggled, Croatia’s leader did not flinch as she hugged and congratulated players from both teams, seemingly the soccer mom the whole world needs right now.

France gets a hug, too.

Sure, 50-year-old Grabar-Kitarovic is a career politician who knew the camera was on her but that astute political skill also displayed a lack of cynicism. Could she recite the name  of every member of Croatia’s squad, their position, and Zlatko Dalic’s preferred formation? Probably. Was her enthusiasm and passion genuine? Definitely.

Grabar-Kitarovic missed the World Cup semi-final against England to attend the NATO summit -we all know how the tournament messes with work schedules but there are some commitments you do have to make – but made it back to Moscow for the final. Before that game, Grabar-Kitarovic met with her Russian counterpart at the Kremlin where they discussed NATO and Vladimir Putin’s upcoming meeting with Donald Trump.

A family photo – with a thumbs up from uncle Vladimir Putin.

Colorful appearances by the Croatian president during the tournament had media across the world frantically looking up her Wikipedia page to discover photos of her on a beach wearing a bikini as well as revealing she was formerly Croatia’s Minister for European Affairs, Minister for Foreign Affairs, Ambassador to the United States, and Assistant Secretary General for Public Diplomacy at NATO.

Until her election in 2015, she was a member of HDZ – the Croatian Democratic Union – a center-right party founded by former President Franjo Tudman, a party and founder that comes with a fair amount of baggage.

Yes – she flies on a regular plane, like the rest of us.

Still, she has said the fascist Ustasha was a “criminal regime” and that “anti-fascism is in the foundation of the Croatian Constitution”. She rejected a call for the Croatian military to introduce a fascist salute popularized by the Ustasha and said the request was “frivolous, unacceptable and provocative”.

Grabar-Kitarovic has called climate change a “weapon of mass destruction”, and is pro-choice. She has not supported gay marriage but did support Croatia’s Life Partnership Act that provides same-sex couples most rights equal to heterosexual couples (adoption of children is a missing part to legislation). 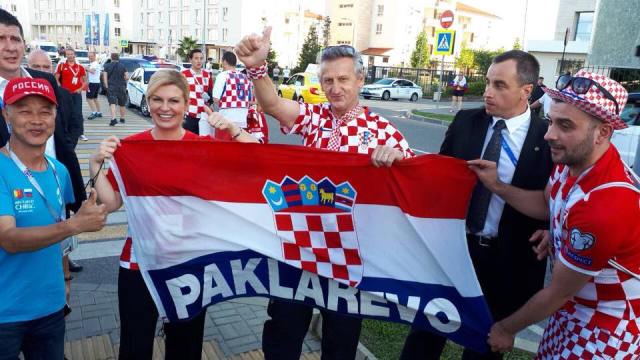 Grabar-Kitarovic’s Facebook  page has photos of her in Russia with random fans, just like the rest of us (although most of us don’t travel with security).

She was elected President in 2016 by less than two percent of the vote, the lowest margin in Croatian history. Like any good – and opportunistic politician – she would extend that lead at home if an election were held today. Who  needs a war when you can have the World Cup? She has certainly helped boost Croatia’s international image and filled a  corner of the internet with posts much like this one.

The larger point is – and one for politicians where soccer (term used intentionally) is not the most-prominent sport – the platform provided by football for your interests and your countries diplomatic and economic interests is huge.

It is a platform no other sport can match.