In the letter to Premier League CEO Richard Masters, Amnesty UK’s Director Kate Allen says, “Unless the Premier League pauses and looks seriously at the human rights situation in Saudi Arabia it risks becoming a patsy.”

As an Amnesty International statement on the proposed takeover highlights:

Amnesty has repeatedly warned that Saudi Arabia under the Crown Prince has embarked on a very active programme of “sportswashing” and other efforts to dramatically alter international perceptions of the country, partly to obscure Saudi Arabia’s extremely poor human rights record. In recent years, the Saudi authorities have hosted a string of high-profile international sporting events, but the acquisition of Newcastle United would be Saudi Arabia’s first move into ownership of a top-tier football club. 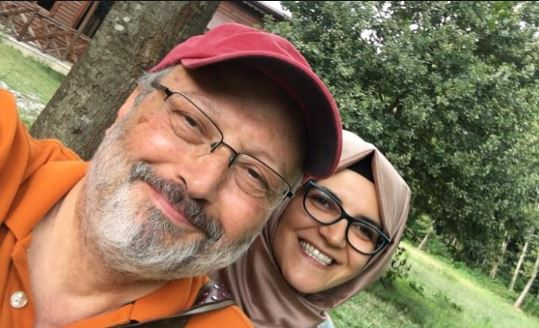 Journalist Jamal Kasshoggi and fiancee Hatice Cengiz before the journalist’s 2018 murder inside the Saudi embassy in Istanbul.

Meanwhile, under Bin Salman’s leadership there has been a sweeping crackdown on human rights, with government critics and human rights defenders arrested, tortured and put on trial, while at the same time there has been a marked increase in executions after unfair trials in the country.

Among those presently on trial and facing a jail sentence is Loujain Al-Hathloul, a prominent women’s human rights defender arrested in May 2018.

Click here for stories of some of the people executed in 2019.

While exiting owner Mike Ashley was far from ideal, especially for Newcastle United fans, be careful what you wish for. As Barney Ronay points out in The Guardian:

Ashley wants to sell you a cheap nylon tracksuit. Saudi Arabia wants to sell you a soft-focus view of its oppressive regime, safe in the knowledge that a mega-spending spree will provide instant distraction, thereby treating the fanbase of a great British football club as useful idiots in the soft‑power game. “We’re getting our club back,” has been a refrain in the last few days. Really? Because it looks more like something more precious is being taken away.

Meanwhile, the chances of the Premier League considering Saudi Arabia’s human rights record? Zero per cent. If they did, this deal would never go through under any fit and proper owner test.

← Canada Soccer, Vancouver Whitecaps, and a sexual abuse story that won’t be ignored (despite some ‘best’ efforts)
Jadon Sancho and Marcus Thuram, English and French footballers in Germany, offer tributes to George Floyd and #BlackLivesMatter →